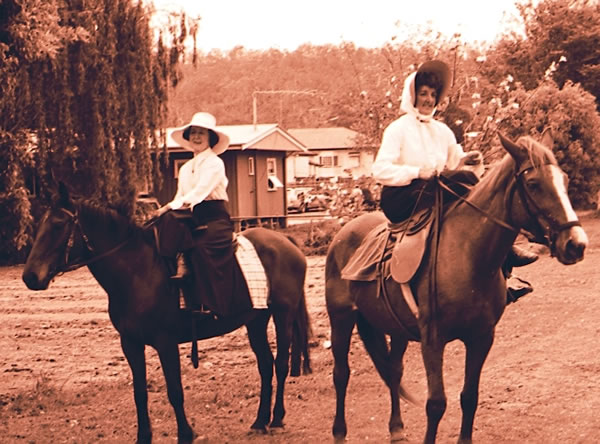 Saturday, the 27.10.1979, the day of Canungra’s Centenary Procession. – We arrived early. The main road was closed for traffic for a few hours to let the procession pass through.

And what a procession it was, at least 50 vintage cars and horses with original Canungra Light Horse Brigade members from the First World War. – Old motorbikes, horse-drawn carriages, and even a bull-drawn cart. People dressed in fashion from the time of the 1. World War. Women were riding sidesaddle, and kids played with wooden hoops.

We raced from one end to the other, our cameras running hot, taking pictures of individuals hoping they would buy their pictures. – In the end, we had five films, equalling 180 pictures. – We stayed for all the festivities before we went home and worked on developing the films, making contact sheets and enlargements.

Early next morning, we drove to Beechmont to show Liz and Marie the founders of the original “Hinterlander”. They published 36 of our black and white pictures.

Our next step was driving to the Canungra convenience store; the owners expected us. They had set up a section where we could display the contact sheets and 20 large format 20x25cm pictures for people to order.

Please check your email for a confirmation email.

Only once you've confirmed your email will you be subscribed to our newsletter.